Welcome to "Cloud Talk" with JustCloud

We know that Cloud jargon can be very confusing so we have created a quick glossary of popular Cloud Talk terminology.

Google Cloud Storage Defined as a 'hard drive in the clouds', Google's Cloud Storage allows users to back up all files into the cloud. Whilst users are unable to sync their files to other devices they are able to access them via a web browser.

Amazon Cloud Player An application which allows users to play the music they have stored in their Amazon Cloud Drive. Applications are available via the web and for the Android.

Amazon EC2 EC2 stands for Elastic Compute Cloud. It is a product which lets users define the amount of computing power they require. Users can increase or decrease the power at anytime and are charged accordingly.

Amazon S3 S3 is a 'Simple Storage Service' owned by Amazon which allows businesses and developers to hire storage space according to their needs. More can be acquired quickly if needed.

Automatic Online Backup Automated backup is a feature of online backup which backs up your files according to a schedule defined by you. Once set up no further interaction is needed.

Backup Backing up is the means by which you create a copy or multiple copies of your files and store them on an external hard drive or in a cloud. The reason for doing this is to retain a copy in an alternative location in case your hard drive crashes, your computer becomes infected or is stolen.

Cloud The cloud is the name used to describe online file storage and sharing services. Named as so because of the way in which you can metaphorically reach up and pluck what you need from them, from wherever you are in the world.

Cloud Bridge The process whereby an application is running across multiple clouds.

Cloud Collaboration The ability to collectively amend, change or develop files held in a cloud, in unison with colleagues or chosen participants. Cloud collaboration however is only available from providers who offer share & sync features. All changes can be seen by collaborators as they are backed up automatically.

Cloud Computing A web based, scalable service that is the name given to the process of accessing an array of storage services and applications via the internet.

Cloud-Enabled Devices The term used to describe any internet ready device from which users have the ability to access their cloud and the files stored within it. Often these devices will need to install an application or interface in order to work.

Cloud Oriented Architecture The definition of, applications which act as services within the cloud.

Cloud Portability The movement of cloud applications from one cloud to another.

Cloud Provider Companies who provide cloud based storage or services to businesses or individual users. These provisions can be based on a paid subscription or free.

Cloud Sharing This process has replaced having to send files as attachments via email. Cloud sharing allows you to share the files you have stored in the cloud by giving other people access to them.

Cloud Storage Cloud storage is the best way to protect your files from harm. By storing them with a third party online cloud storage provider rather than on an external hard drive for example you are not only able to access them anytime anywhere but you also protect them from being lost or damaged.

Cloud Streaming The ability to be able to stream the files you have stored in the cloud via any mobile device.

Cloudsourcing The term given to the replacement of traditional IT with cloud services.

Cloudware Software which allows applications to be born, used or managed in the clouds.

File Syncing File syncing is the process whereby versions of documents which you have made amendments to, via your computer or mobile internet device, are synchronised during backup. This means a file you have amended via your mobile phone will appear altered via all internet ready devices.

Google Apps Gmail and Google Docs are Google born applications which are stored in the cloud rather than on a hard drive to allow the data on them to be accessed from anywhere.

Google Music Google Music is a storage location in the cloud where you can store personal music files. These files can then be streamed through any mobile internet device or browser through the Google Music App. (Currently only available on Android phones)

Hosted Application A software program that runs on internet servers in the cloud. Hosted applications are accessible through a browser rather than installed.

Internal Cloud Not a cloud in the traditional sense, but an internal cloud is a cloud created by a corporation who build and maintain their own offsite data centres to server their extensive number of employees. This is particularly useful for transatlantic companies.

Online Backup Online backup is the process by which you make and store copies of all your data e.g. files, music, films, videos in a cloud online. By doing this you can restore everything back to normal if tragedy was to befall your PC. Online backup is much more secure than other forms of backup because storing your data away from your PC alleviates the risk of natural disaster and human error.

Private Cloud A private cloud is as the name suggests, private. This cloud can only be accessed via a login and password system. Private clouds are mainly implemented by big businesses.

Public Cloud A cloud which offers on demand storage and services to the public that is accessible via the internet.

Subscription-Based Pricing Much like magazines or Sky television, cloud services are often charged on a subscription basis. A monthly or yearly subscription can be paid.

Sync In cloud terms 'sync' means having access to the most recent version of any file you have in any synced location. For example, by syncing when using a cloud, you can access the most up to date version of a file made on your computer via your mobile phone. 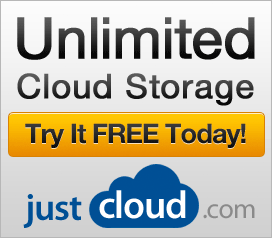 Enter Your Login Details Below